The previous Newsletter (June – July 2015) summarized the financial year of Resource Centers International (RCI). Financial donations to RCI are extremely important to the conduct of missions but they are secondary in importance to the efforts of Donors and Missioners. This Newsletter thanks the individuals and organizations who donate their time and the educational materials required for each mission.

From May 2014 to June 2015 twenty (20) different Rotary organizations (Rotary Clubs, Interact Clubs and Districts) have made donations of equipment and supplies. Twenty (21) individuals as well as six (6) schools, nine (9) businesses and eleven (11) NGOs (to include churches and hospitals) have also made non-financial donations. Dozens of individuals have donated their time to set up computers, load containers, sort and organize product as well as go on last year’s two missions. Additionally, Home Depot and Sam’s Club have supported the project by selling product at cost, or providing significant rebates on items purchased.

At the end of the Newsletter is a detailed listing of donations made during the year when we received as donations over 200 computers, 180 plus boxes of books and VHS tapes and thousands of other items such as televisions, soccer balls, tables, overhead projectors and games and toys. Of special note is that when Lourdes University closed their Franciscan School they donated their entire Elementary School Library to RCI… by far the largest single donation of books we have ever received.

Resource Center International’s (RCI) plans to conduct its first mission to Mexico in December 2016 in collaboration with the Rotary Club of Puruandiro Purepecho, District 4160. This is RCI’s first mission in a non-English speaking country and therefore will present new challenges as it is much easier to collect educational materials in English than in Spanish.

Puruandiro is located in the highlands of central Mexico in the State of Michoacán. The city is 200 miles west of Mexico City and 60 northwest of State Capital, Morelia. The municipality of Puruandiro has 70,000 inhabitants while the city has 30,000. There are 3 Rotary Clubs in the Municipality. the Purepecho Club gets its name from the indigenous language. Only 150 people still speak Purepecho in the municipality. If you would like to get a glimpse of the City please check out the You Tube video. Although in Spanish you can definitely get the flavor of the city without an understanding of Spanish. 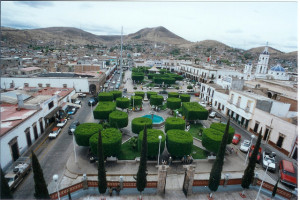 View of the square and environs 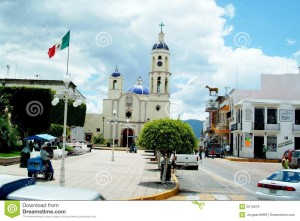 The zocalo or town square of Puruandiro

How does one start a mission in Puruandiro? My cousin (I should say my son-in-law’s cousin) Sandra Olmos, is a primary school teacher in the city. While visiting this summer, Sandra and I talked about the project and how (or if) we can do a mission in Puruandiro. The first step was to contact the local Rotary Club to see if there was interest. The following day we were contacted by Club President Marco Guiza expressing interest and requesting clarification. Within a few weeks the Club approved and committed to the project; and had meetings with the Ministry of Education to also get their commitments. Over the past month Marco and Sandra have been continuously working to make this mission happen. The Ministry of Education is now developing a list of the neediest schools in the area.

As already stated Mexico presents new challenges for RCI, language being the primary one. It is anticipated that we will not be able to collect near enough books in Spanish to satisfy the concept of establishing a mini-library/resource center in the selected schools. We will approach this challenge in several ways and we need your help (as always).

How can you help us? Through donations of art supplies and materials, sporting equipment (soccer balls, baseball equipment, volleyball equipment, balls etc.) puzzles and games… and most importantly educational computer software programs and books in Spanish.

Donations during the month of August

Your donation can be here next month. Our next mission to Belize this coming March is fully funded. We now need to seek funding for our mission to Mexico.

Invite us to present at your weekly Rotary Meeting. There are lots of changes going on as we move forward and we would like to bring you up to date on this MESA project.

The following is a listing of donations of educational materials to RCI during the 13 month period of May 2014 through June 2015. We want to sincerely thank all the individuals and entities that helped make our work possible.

A special thanks to those who went on missions:

Weeks of work went into preparing computers and maintaining the Website: