This September Project Manager Mel Honig completed a trip to Belize to set up 6 sites to start either complete or partial Resource Centers during our next mission trip in December 2011. Visits were also made to the centers established in Cayo District, as well as meetings with Belmopan and Corozal Rotary members and Peace Corps Volunteers who are actively supporting the program.

Due to the generosity of District 6600 Rotary Clubs and Rotarians almost all the equipment and supplies has been collected to furnish eight to ten Resource Centers this fiscal year. We still need 20 more computers. Unfortunately we will not be getting any subsidized shipping this year, so we need to raise an additional $5000.00 to cover operating expenses.

The September mission to Belize had five objectives. The primary objective was to identify and qualify four new communities to have Resource Centers established during our December mission in the Corozal District. Secondary missions were to:

Everything did not go according to plan, although in the end all the mission objectives were completed, but with qualified success.

With the help of Peace Corps Volunteers Kelly, Max and Roma and Urban Development Manager, Eduardo Cus (we started a Resource Center in his home village of San Miguel in the Toledo District) we were off and running with our list of Village Chairman and the communities they represent. Five meetings were set up through the village chairman with their respective communities. Of the five, two were cancelled because of a failure to get a quorum of community members at the meeting. Of the remaining three, two had all the prerequisites we were seeking in a community. The third did not have electricity connected to the community center building, a project they will have to complete before we can install the Resource Center.

It was now the last day and we only had two sure and a probably third community for our December mission, so we were off to track down the Village Chairman of three other potential villages that could fill out our need to have a minimum of 4 sites. The first group of villages was all in easy access of Corozal Town. This next group was only ten to fifteen miles away from Corozal Town, but over dirt roads and crossing rivers on hand crank ferries. Thus a fifteen to twenty minute trip could easily be an hour depending upon traffic at the ferries. These were fishing villages and a pleasant change from the other communities I have visited in Belize. We met each of the Village Chairman and got commitments from them, but this is not the same as getting a commitment from the community. When we return in December we will have some additional work to do to insure that the communities are on board.

We are talking with the Village Chairman Felipe Fabro, prior to our meeting with community members at the Calcutta Community Center. 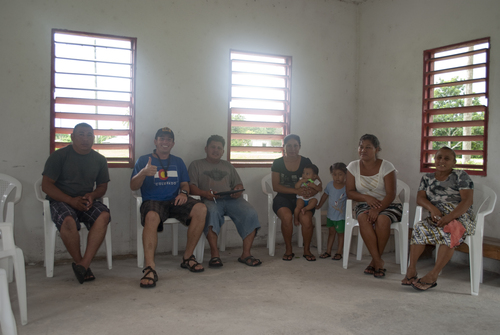 Meeting the with community members at Yo Chen. That is Max, Peace Corps Volunteer giving the thumbs up after a successful meeting. 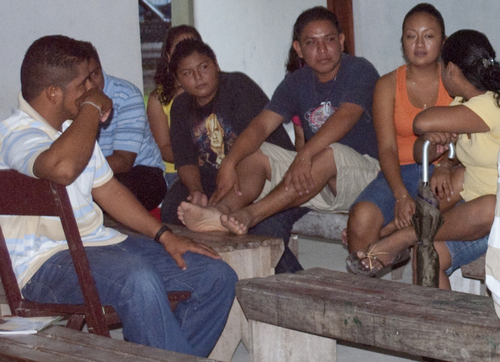 After the meeting at San Pedro the young people got together and organized a committee with Jorge Cob acting as President of the Resource Center. 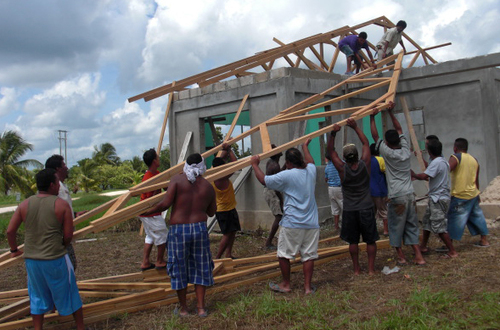 The community pitched in to help build the Resource Center in Copper Bank.With construction complete all that is needed is to finish the ceiling and supply electricity to the building. 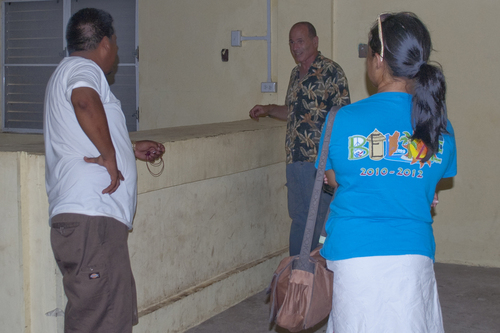 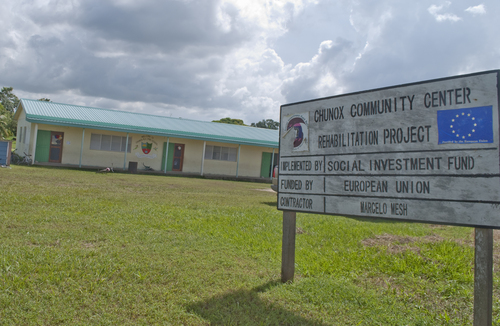 It is very disconcerting to see the European Union emblem on so many projects: Health Centers, Schools and Economic Development without ever seeing projects sponsored by the United States. 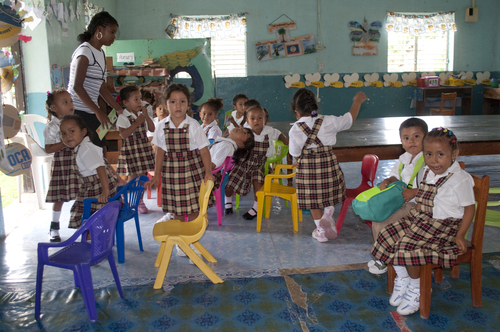 The pre-school At Progresso is being moved into another building. When this happens this building will be converted into the Resource Center.

Meeting with Belmopan Rotarians Eric Maas and Joe Allen Mena confirmed our intuition that Belize Natural Energy Trust was still deadlocked and there would be no funding for shipping this year. In the past they have subsidized our Belize shipments. At the meeting we also decided that there was insufficient time to submit a grant request to Rotary International. The Belmopan Rotary Club will be partnering with us on the December and March missions by accepting and storing the equipment and supplies we are sending down.

Another possibility for subsidized shipping was piggybacking onto a shipment of medical supplies for the Corozal Hospital. Earl Johnson, President of the Corozal Rotary and I were not able to obtain a commitment from the Ministry of Health to obtain subsidized shipping in time for our December mission. The Corozal Rotary will also be partnering with us on the mission by supplying expertise and possibly actively participating in training at the communities.

Updating the video of our first mission

Terri Birtwhistle, Photography student at Owens Community College accompanied me on the September mission. Her responsibility was to take pictures of the sites we visited and interview key people. We will be making an updated video of what RCI has accomplished to date. Most of the pictures in this Newsletter were taken by Terri.

Of the eleven missions that we have opened we now have ten. The only mission that we have on property not owned by the community was closed. The school needed to expand and so the Resource Center became expendable. Everything we placed in the Center was donated to the school.

Rather than dwell on a center that did not succeed I would prefer to talk about one that is highly successful. When we visited Billy White, Jasmin, the President of the Board told me about two computers that stopped working. We also discussed the fact that they now have internet that costs $120BZ a month ($60US). On the wall of the center there is a sign; “NO CREDIT”. The center charges $3.00 ($1.50US) an hour. It is open every night and they don’t have enough computers to fill the demand, as students wait in line for an open one. To insure that the computers are used effectively they set aside one hour each night when the computers can be used for Facebook. Other than that they are for homework. When I asked about the broken computers, they got fixed. Jose, one of the young men in town is in charge of the computer center. The broken computers sat on his lap in a bus as they went to the repair shop and paid for out of monies earned from computer usage and fundraisers.

Their child enrichment program graduated 13 students to Infant One this year, and has once again another group of pre-school age children anxious to learn. The center is open everyday, run by Jasmin’s mother Miriam. 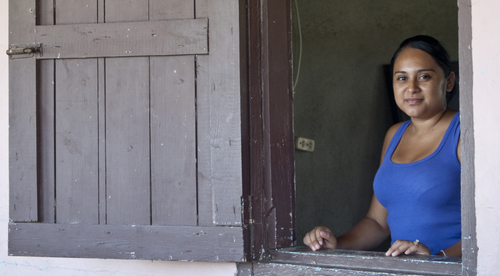 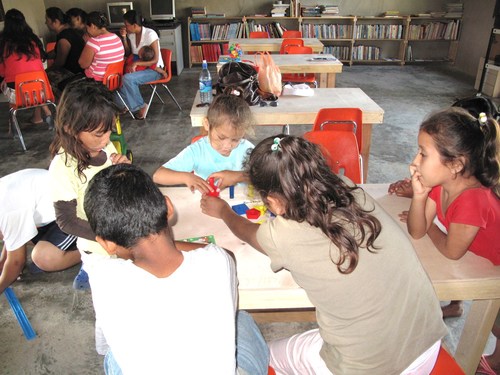 Billy White: Getting the most out of a Resource Center through community cooperation and effort.

Getting ready for the March mission

During our visit to the Spanish Lookout area we met with Loyden Bejerano, a student at the University of Belize. He is a former teacher and primary school principal, and also very much interesting in furthering the educational opportunities in Belize. He has already helped us set up one site for our March mission in Hope Creek, a community in the Stann Creek District. We will definitely rely on him to help us in our future endeavors.

Another Resource Center site being developed in the area is the community of Buena Vista. Jack Barnes, San Ignacio Rotarian is helping us get this site ready for our March mission.

We also have potential sites at Valley of Peace, Duck Run 2, and opening a computer center in the library at Camalote. During our December mission I will be visiting these communities, asking them if they are willing to support a Resource Center, or a modified Resource Center.

PLEASE HELP! If you would like your Rotary Club to have a presentation and/or possibly participate in this MESA project or if you can help us out with any of the above please contact the Resource Centers International Coordinator:
Mel Honig
gailmel75@yahoo.com
419.843.4459 (h)
567.686.3406 (c)