There were two objectives for Mission 10 to accomplish: one has been completed and that is opening 18 resource centers in pre and primary schools of Toledo District, Belize. We more than met this commitment thanks to the work of the Rotary Club of Punta Gorda, The Ministry of Education and the Rotarians of District 6600. Not everything went as planned so please read the below article ‘Mission in Pictures’ for the details.

The second part of the mission was to develop a promotional video. This is still a work in process as we have as we interviewed more than 30 individuals: administrators, principals, teachers and students. We also had a drone take pictures of nearly all the schools and communities we visited: the site we stored the distributed educational materials: the town of Punta Gorda: and Davis Falls… the second highest falls in Belize. The promotional video will be placed on YouTube once it is completed. We also plan to post many of the other videos on YouTube.

There is also a discussion about the electrical problem at the St Joseph’s RC School. When we passed this information onto Bob Farley of the Belize Training Center, he sent his electrician to Barranco to evaluate the problem. The work to restore electrical service to the school is already well under way.

When the mission team got to our storage location in Belize, the Belize Training Center we realized we had a problem. Upon review of the applications, one thing not on the applications was ‘Do you have a reliable electrical supply’? Over half of the chosen community schools did not. Many of the schools also were one or two room classroom schools with student populations as small as 15.

Knowing we had extra computers, televisions, VCRS with tapes and books we decided to distribute everything according to need and capability… then inventory what was left over and go from there. The original plan was support 18 resource centers. In the end we did 22 schools, 2 after school programs (one for adults and the other for children) and still had enough to give a significant amount of educational equipment to a school program sponsored by the Ministry of Education, Toledo Office.

We visited and set up centers at every school but two. In two we missed the roads were impassable. The rainy season ends around this time of year but during the 11 day mission we maybe had 20 hours of sunshine with clouds and rain being the norm. As we drove the back roads more than once we would stop to evaluate our prospects of getting to the other side of the washed out road. We made it every time but a less cautious group might not have even tried as we slipped and slid to ‘terra firma’ on the other side. 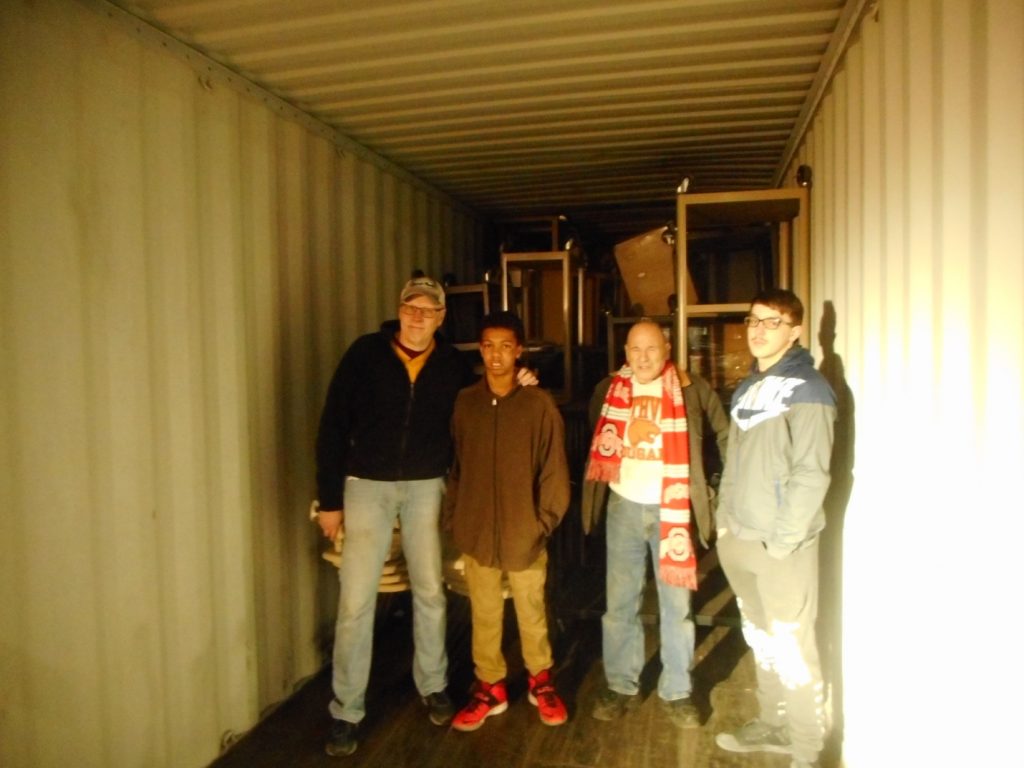 Every mission begins with collecting… educational equipment, funding and a mission team. Next is to get the product to the distribution point in Belize. Shown here are volunteers loading the 40 foot container. 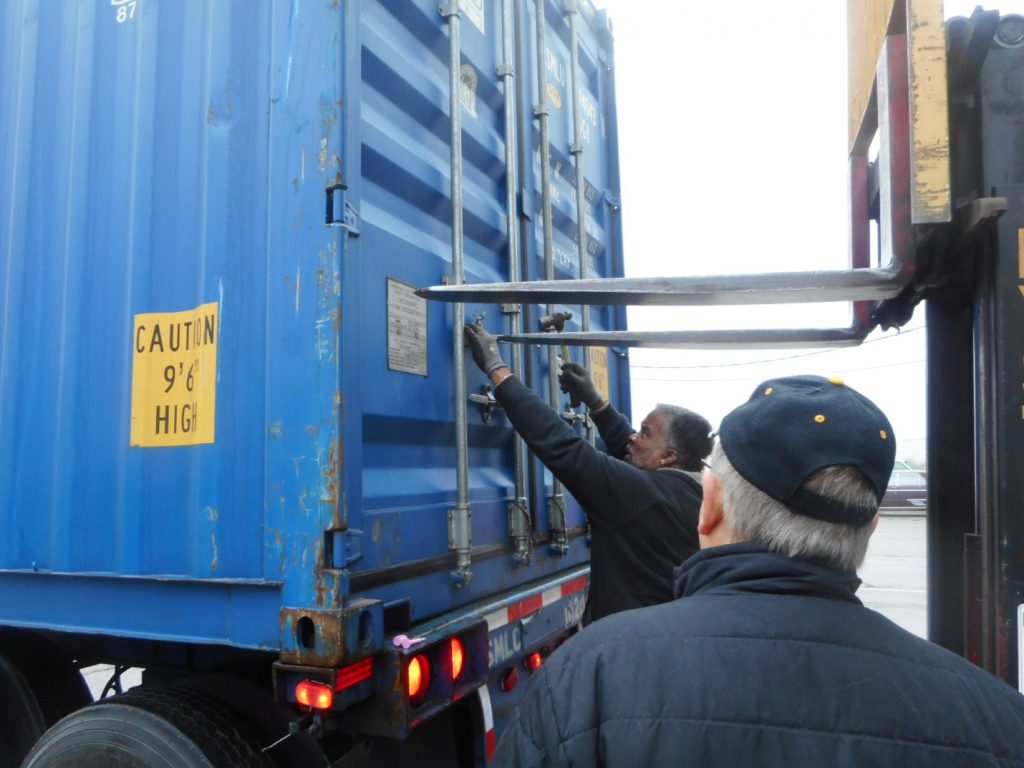 The container is filled to the brim. There was some extra room so some medical equipment was used to fill out the load and with the help of the fork lift the doors were closed and sealed.

We sent some bicycles down of this mission and the schools found some unique ways to use this donation. The bicycles were collected and repaired by the Boy Scouts of America. One school was auctioning off their bicycle as a fund raiser. 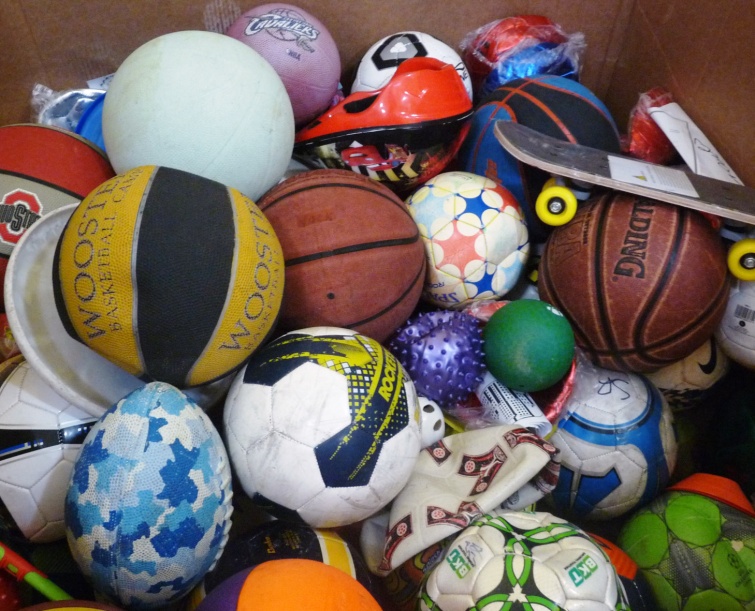 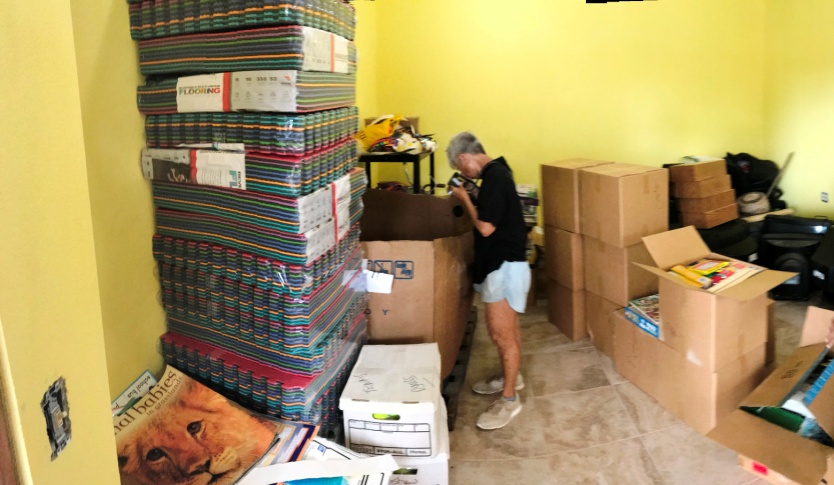 When the container arrived the Rotary Club of Punta Gorda unloaded it at the Belize Training Center. We divided up everything in three rooms. One room was computers and computer equipment… another crafts, games, toys, floor mats and televisions… and the third books, file cabinets and shelving. Items that were relatively safe from inclement weather went outside… mostly chairs, tables, bicycles and AV carts. 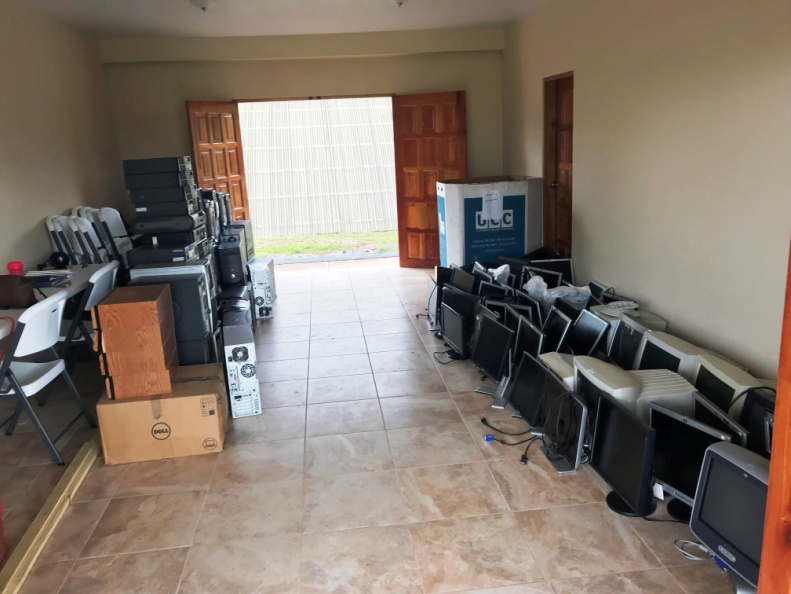 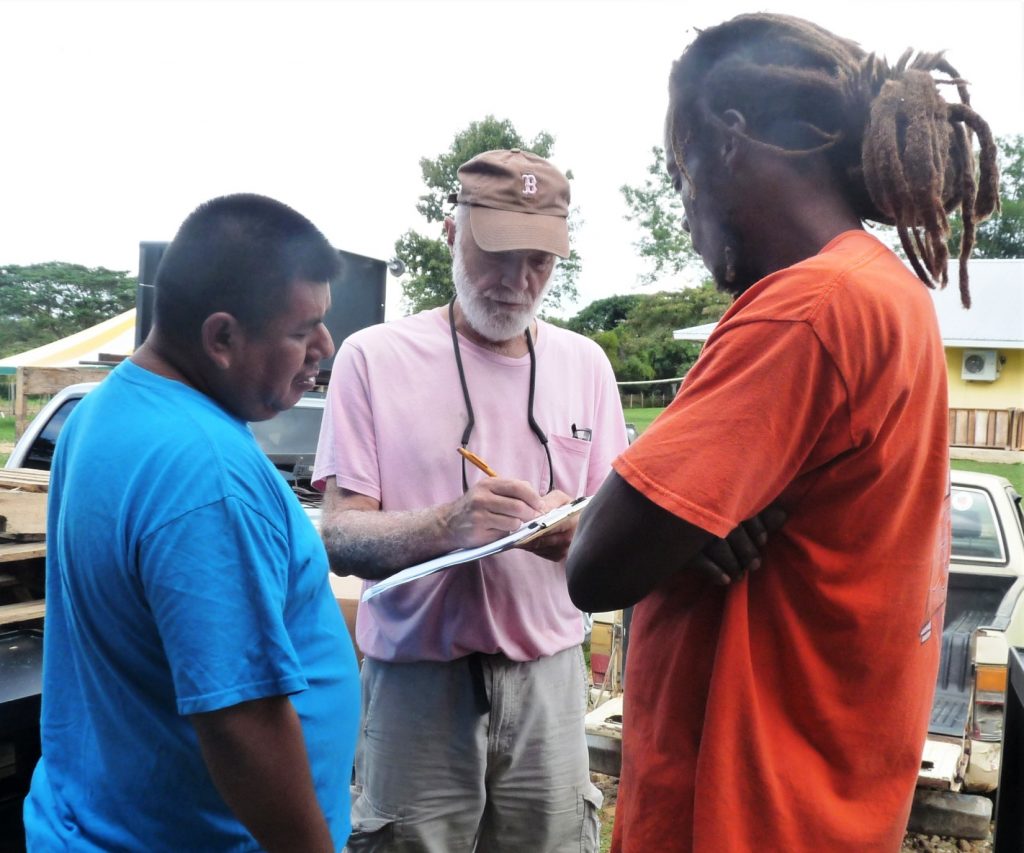 The schools were contacted to pick up their allotment. Everything was inventoried and signed for by the Principal. The Principal got the original while… a picture was taken and photocopies sent to the Ministry of Education, Managing Authority, Rotary Club of Punta Gorda and RCI. 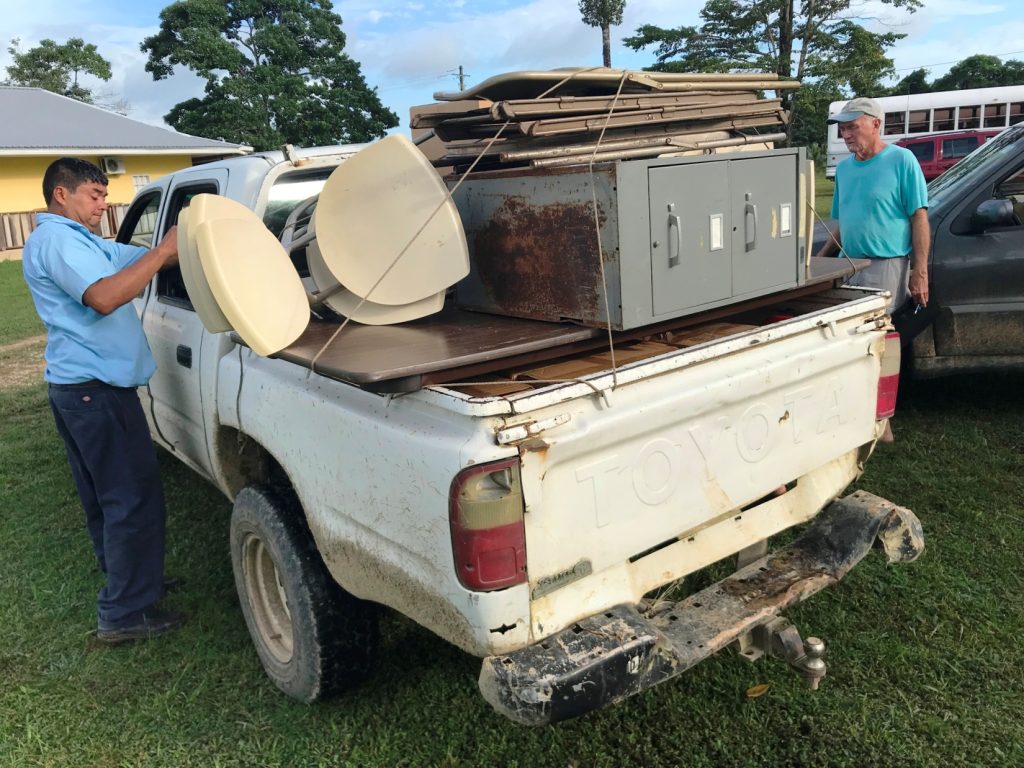 Loading up… a process that was repeated about 30 times during the 11 day mission. 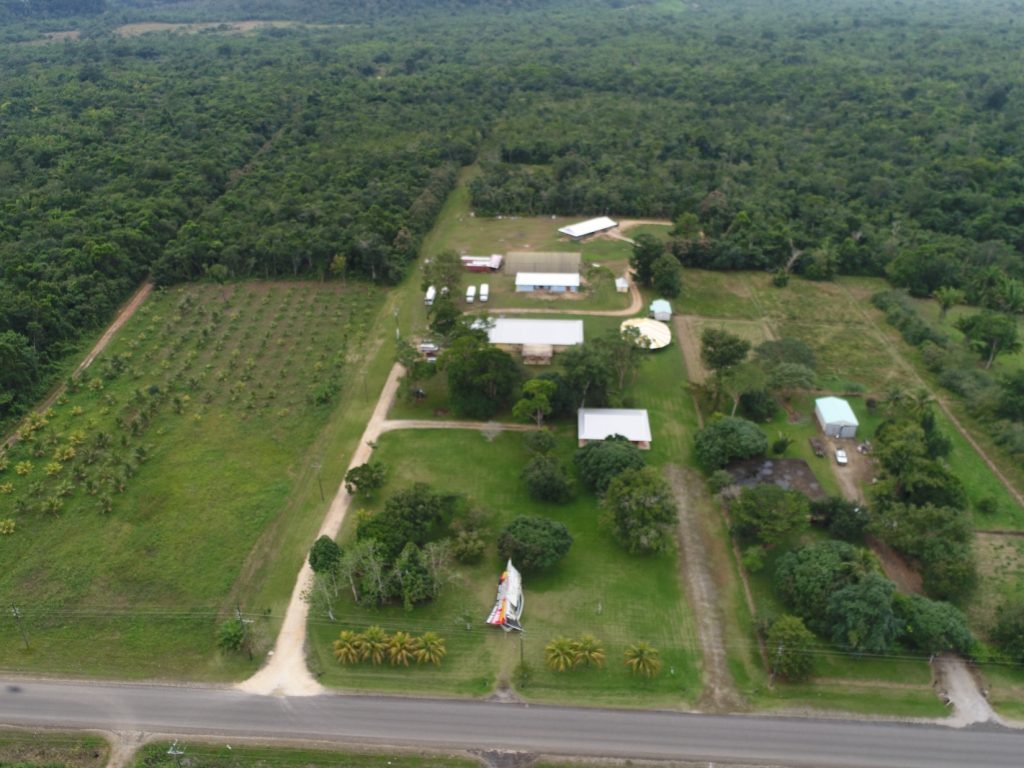 An overhead look of the Belize Training Center, our center of operations. 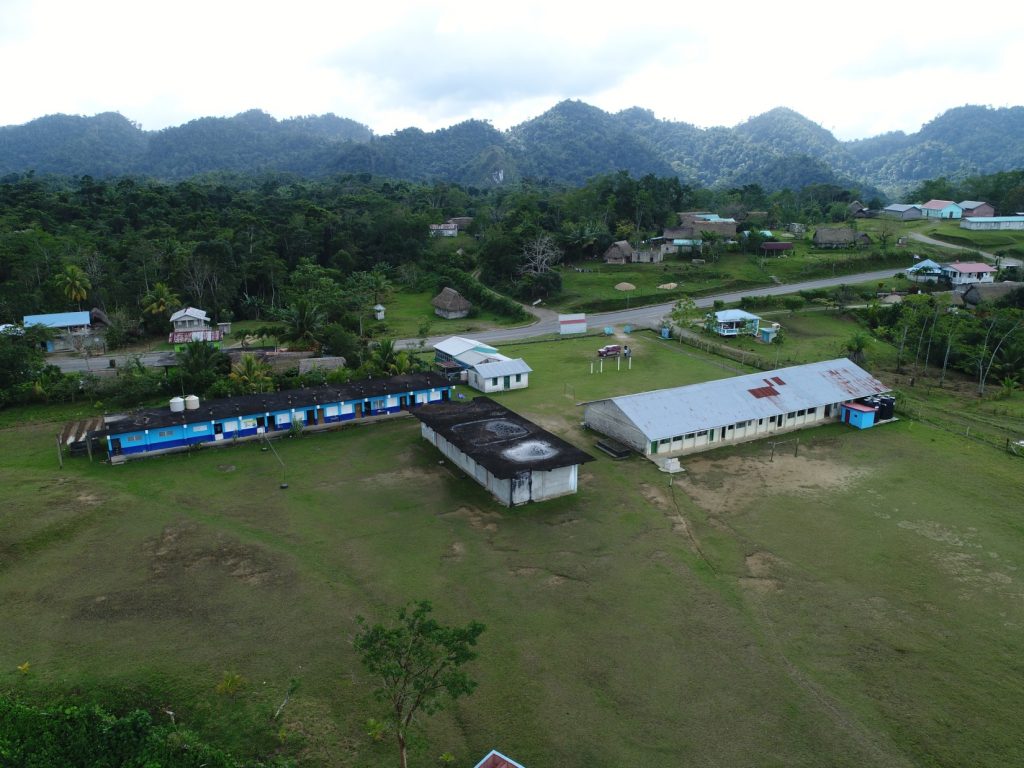 The school at Pueblo Viejo. This one, along the main road, was off the grid with electricity supplied by the sun. This is a Mopan Community with Mopan the language spoken at home. When children come to school they have little or no knowledge of English. 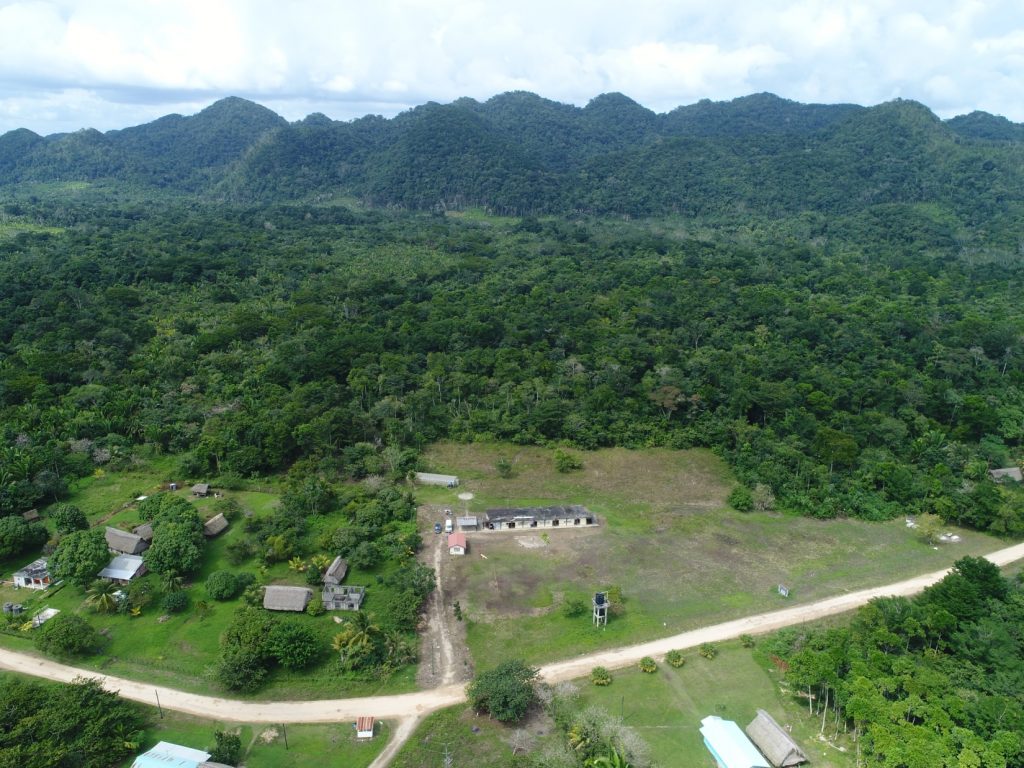 The school at Santa Ana. This is Q’eqchi’ Maya community. In general all the community members live in town and have farms that they tend getting to them by foot, bicycle or motor cycle. The farm animals live in town and are free to roam. On the other side of the mountains is nothing but jungle… the home of monkeys, parrots and big cats (jaguar and mountain lion).

We washed her once and the next day it looked like this. When the videos are posted we will have pictures of us navigating the back roads of the Toledo District. 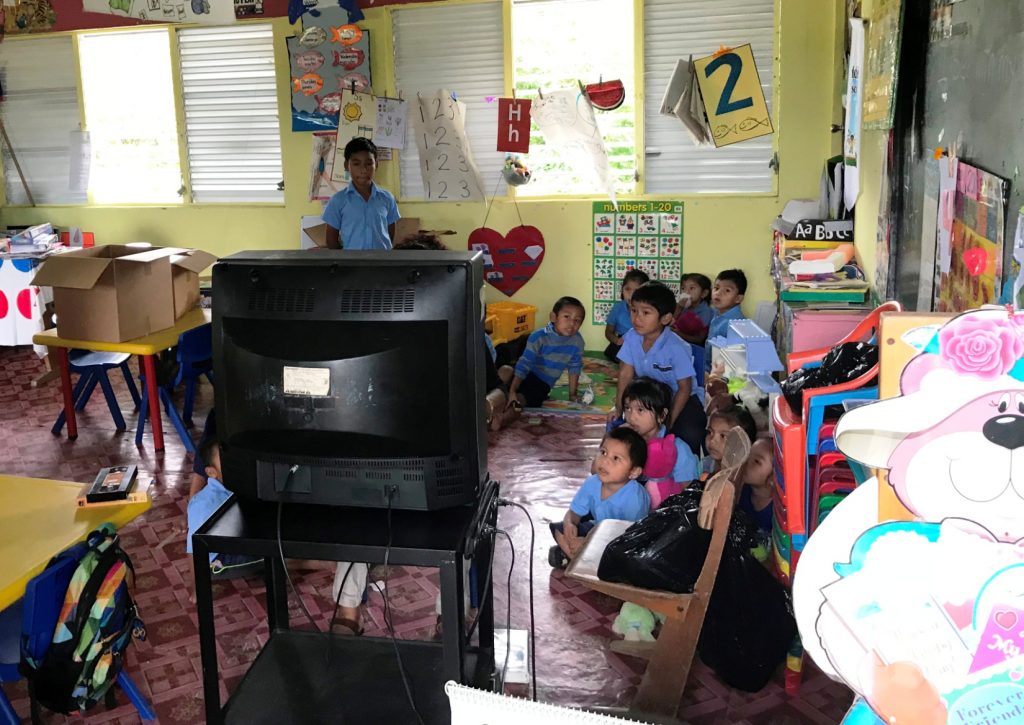 I think the teachers liked the television more than the students because while some of the students were occupied they could work with other students that needed extra help. They also realize that it was a good learning tool. Almost 100% of the students entering school do not speak English… which is the official language of Belize. All the VHS tapes sent are age appropriate. 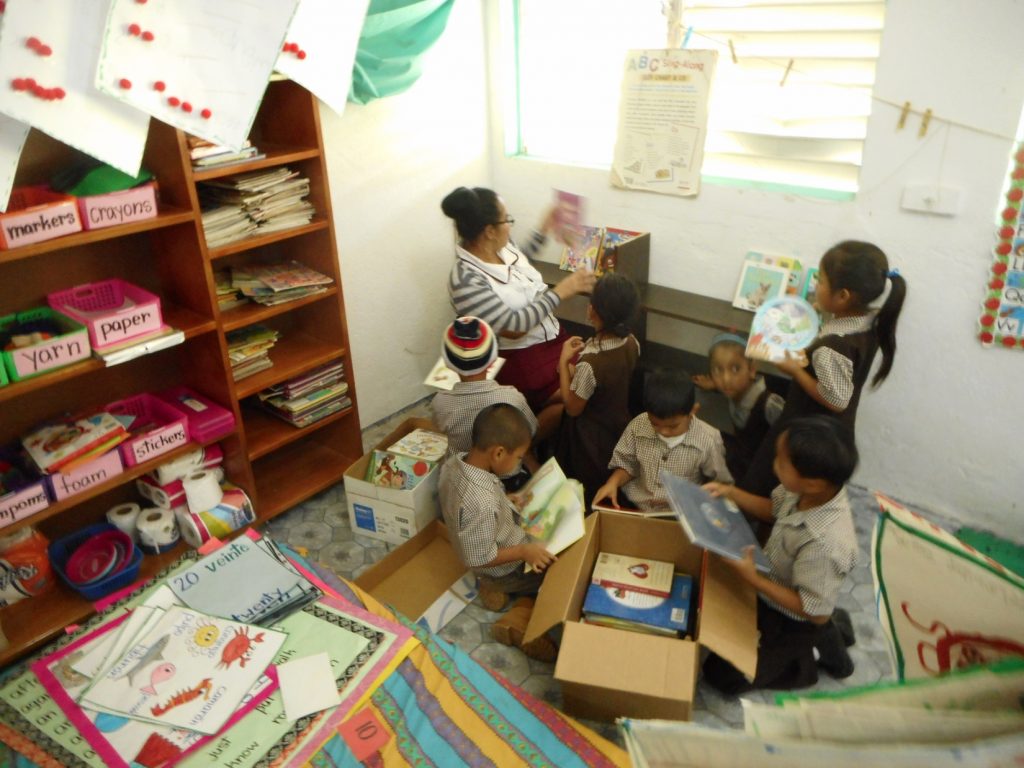 After the shelving is built teachers with the help of the mission team… and in this case students put away the books. 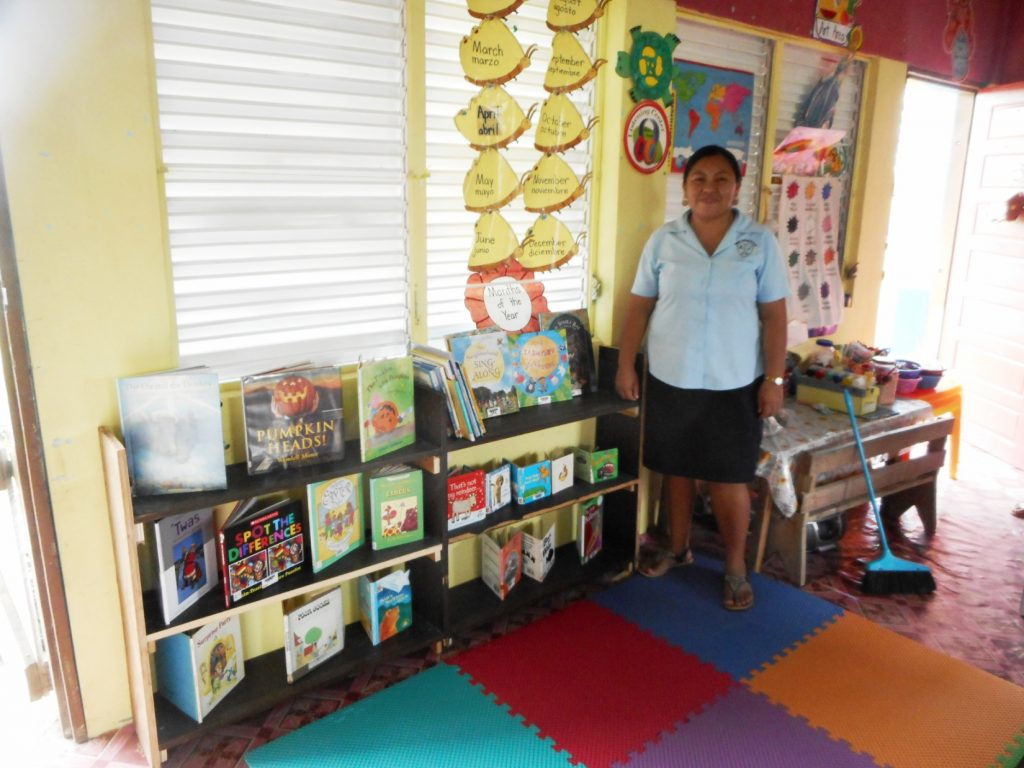 When the flooring is placed on the floor and books set up each classroom has a ‘reading corner’. Teachers are encouraged to hold some books back and rotate them on a continual basis. 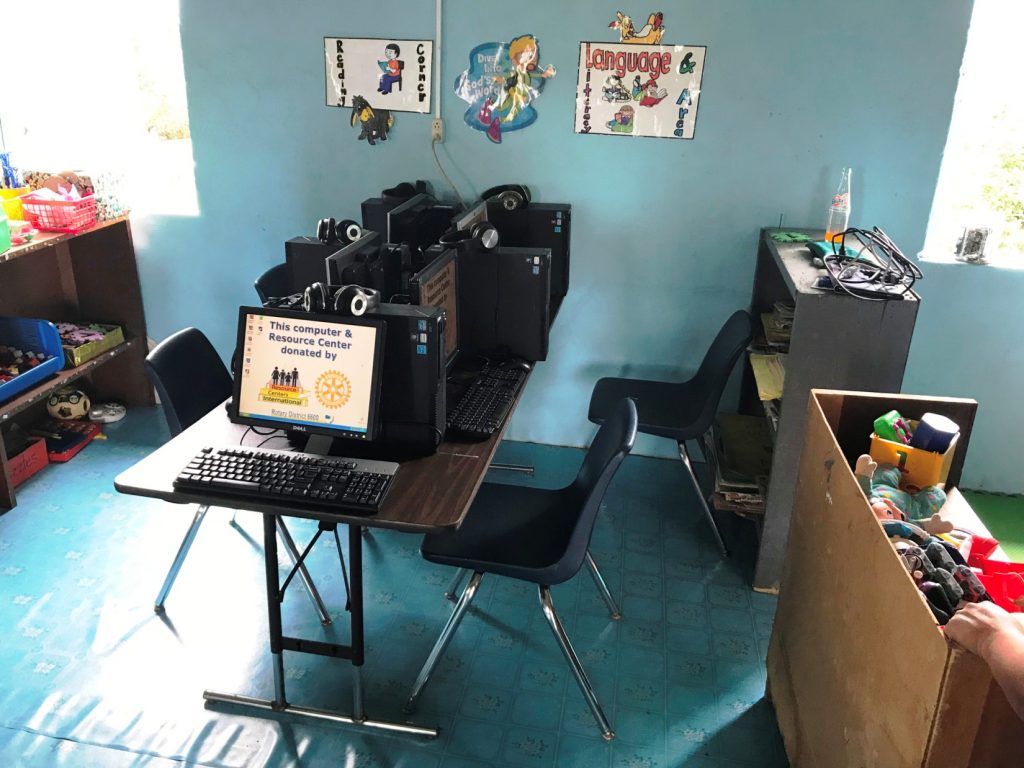 We bring a table and chairs for each computer center. The computers are loaded with educational software for children ages 5 to 11. 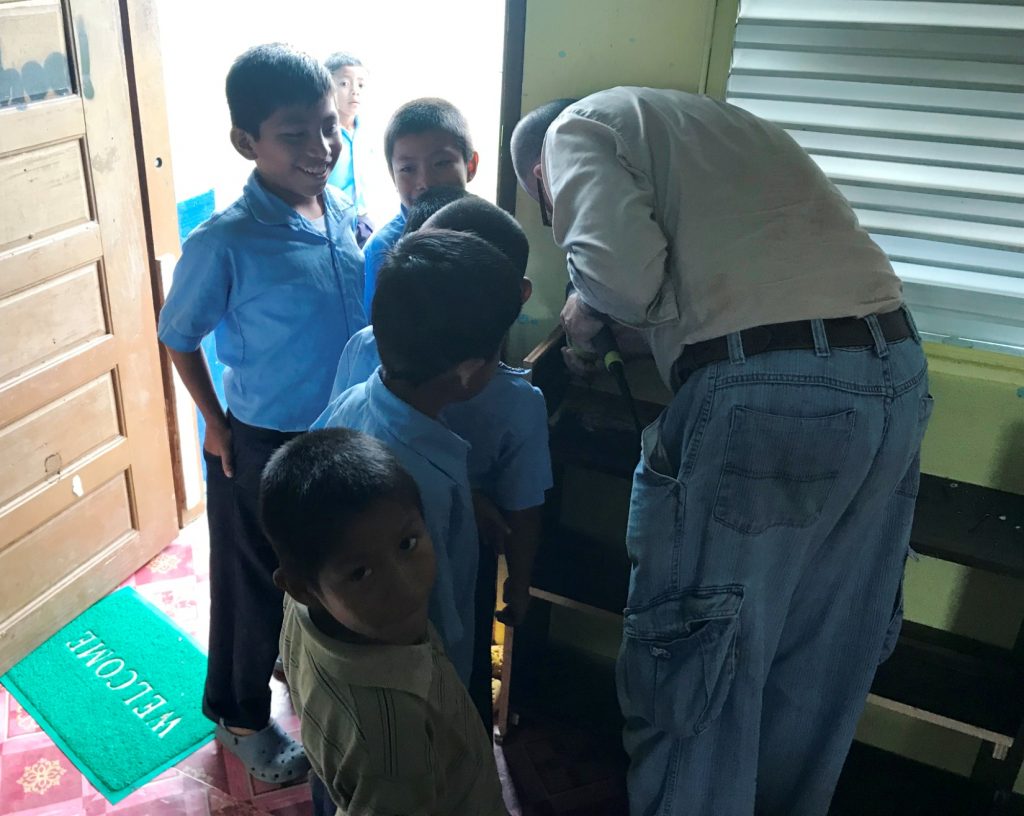 There were always plenty of helpers. 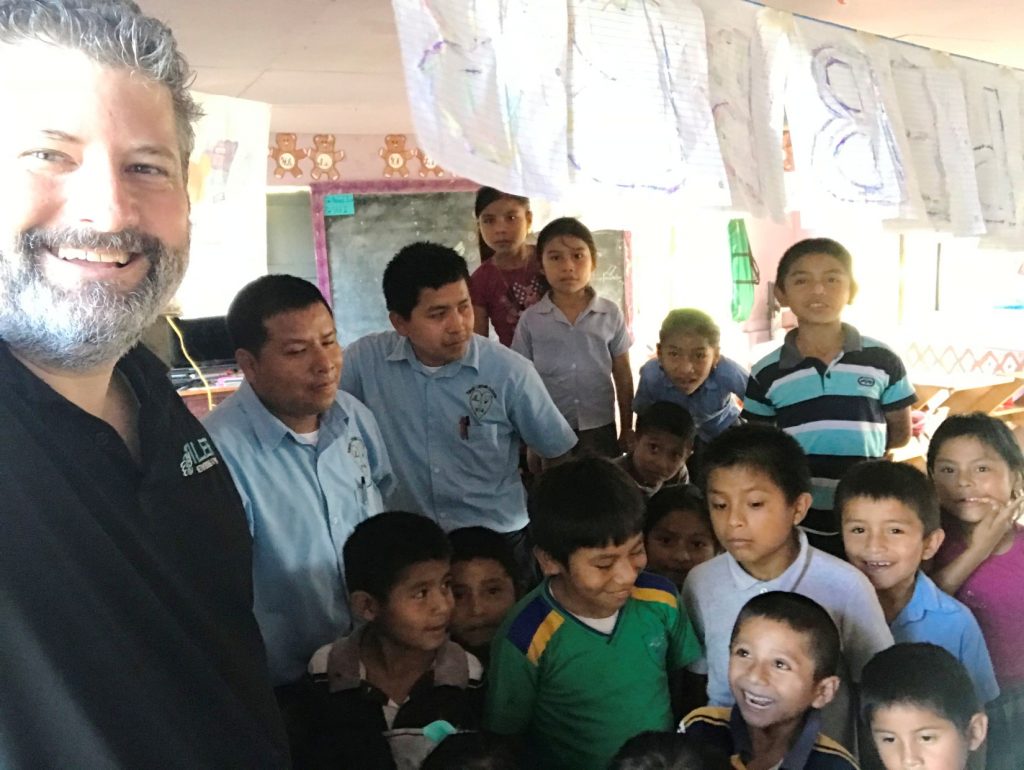 Kent Iler (Elyria Rotarian) has been on every mission for the past 3 years. He not only sets up the computers but he also wipes the donated computers and then downloads them with the software prior to shipment to Belize. 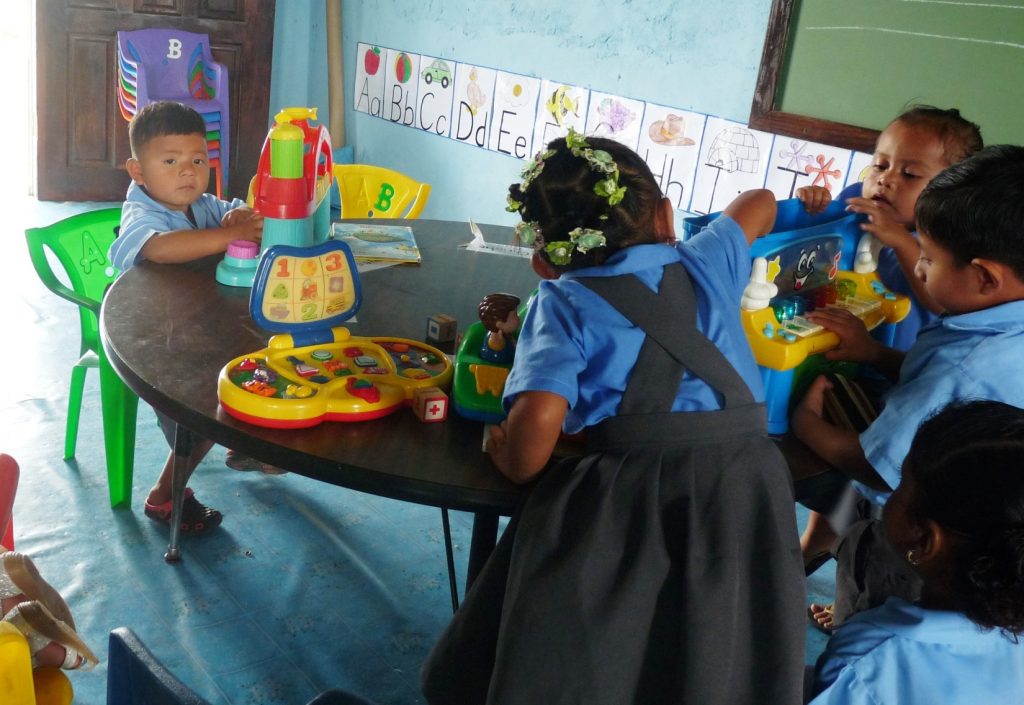 Toys are important because they are not only fun but develop hand-eye coordination, fantasy and social interaction. 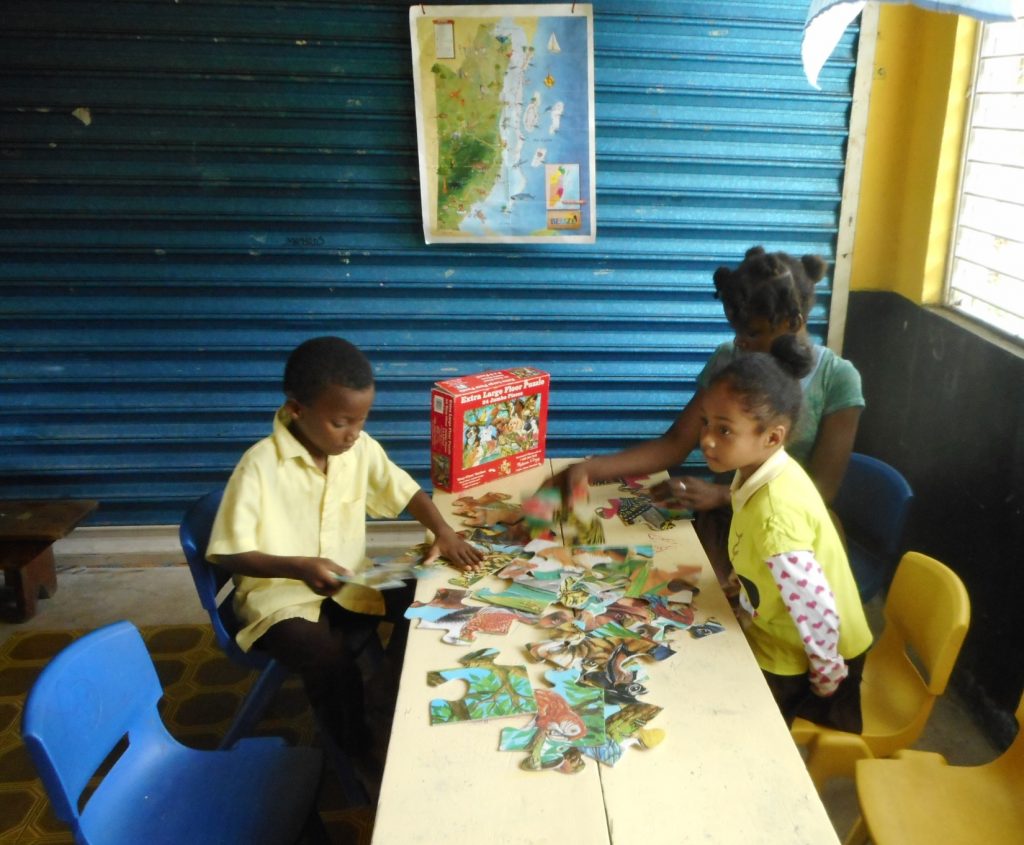 Giant floor puzzles are one of the best learning tools we can send because they involve/develop the students’ skills in many ways.

We are always looking for volunteers to be part of the mission process. Each mission we have not only volunteers from District 6600 but Belizean educators and Rotarians participating. If you would like to become part of the process please contact: Mel Honig, Project Coordinator: email melhonig.rci@gmail.com.

We are always in need of donations of educational materials.  Our number one priority is obtaining computers.  If you or your company has computers that can be repurposed once again contact Mel Honig.

If you would like to have a presentation at your Rotary Club or organization please contact Mel Honig: melhonig.rci@gmail.com