The Rotary Team of Mel Honig, Kent, Stacey and Scott Iler just returned from their mission trip to Belize. Seventeen (17) resource centers were set up in primary schools in four of the Districts of Belize.

It is estimated that approximately 7000 students will benefit from the resource centers placed in schools during this mission. A listing of the schools served follows after the photos.

The Mission in Pictures 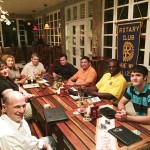 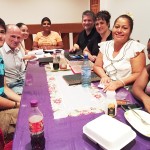 Team members at the Rotary Club of Dangriga weekly meeting. Elcedia Awe, Principal of Solid Rock Primary School (seated second from right) and Tanya Nunez of the Ministry of Education, Stann Creek office (not pictured) selected the schools in the Stann Creek and Toledo Districts that received resource centers.

Eleanor Carillo (standing on left), instructor at the Corozal Junior College and participating in her fourth mission, selected the schools in Orange Walk and Corozal Districts. 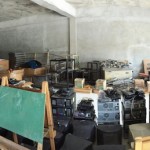 What was left of product stored in Orange Walk after half was sent south to Alta Vista.

Product divided by schools and ready for pickup. 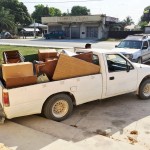 One truck loaded and ready to go to one of 8 schools in the Orange Walk/Corozal Districts. 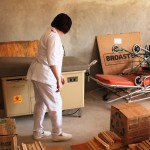 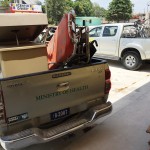 Ministry of Health trucks picking up the medical equipment for the hospital.

Loading the truck with product for Stann Creek and Toledo District schools. The diesel for the donated truck and driver was $400 USD with the schools paying half and RCI half. 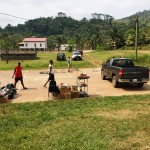 The truck was brought to the Community Center at Alta Vista where it was unloaded. When we went there several days after the product arrived we were assured that it would not rain so we sorted everything on the basketball court.

After distribution of product each school was visited by the team to help set up their resource center. After checking out the situation the first thing we did was to put tables together for the placement of computers.

The next item of business is for team member Mel Honig to build shelves for the books. 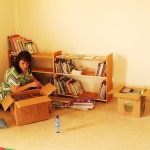 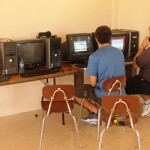 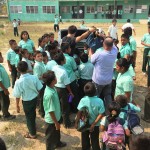 The previous 4 pictures shows us working alone, but this was far from the case. We were almost always surrounded by helpers. Here we are unloading tools as we prepare to work at the Maya Mopan school in the Toledo District. 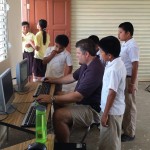 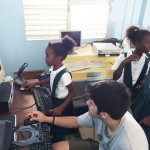 After Scott installed the educational software the young lady to his right started using the program (Jump Start). After the bell rang she was still there and had to be pulled away by her classmates so should she would not miss her next class. 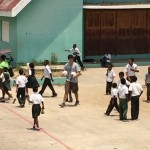 One of Scott’s jobs was to inflate the soccer balls. Two were distributed at each school. Soccer is the major sport among the youth of Belize and each school has a soccer (football) field. 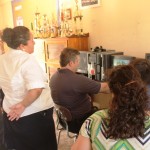 After all the computers were down loaded with software Kent or Scott gave a tutorial to the Principal and teachers on how to use the software. 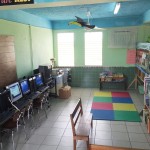 A finished resource center. Most of the time the toys and games were brought to the preschool, or infant 1/infant 2 classrooms (our equivalent of kindergarten, grades 1 and 2 respectively). 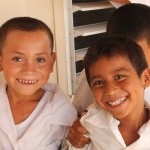 All schools have a standardized uniform but at the discretion of the principal, schools have dress down days when the children can wear any clothing they prefer. 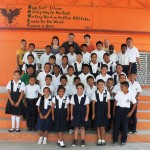 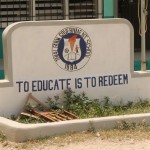 Resource Centers International believes that through education we can make our world a better place to live in. We are working in countries and with people who share our viewpoint… thus making our mission much easier to achieve.

Donations of Equipment were given to the following

Two drives were conducted at the Mercy College of Ohio (Toledo, Ohio). One by the American Assembly of Men in Nursing (AAMN) and the other by the 330 Nursing classes taught by Sharmeta Gibbon and Carla Gonyer. The advisors for the AAMN are Bobbi Pratte and Kate Cook with the President being Eric Hewitt. Collected were games, toys, books, games and video tapes.

*$200 of cost was to pay for diesel to get product from Orange Walk to Stann Creek
** Does not include cost of books purchased from the Friends of the Library prior to January 2015.
***Does not include the personal expenses of the four missioners.

Mission 2 to Jamaica is still in progress. The RCI/MESA container was released to the Rotary Club of Savanna-La-Mar during the first week of April. Everything was placed in two donated containers and is currently being distributed under the direction of Hilda Hibbert, the Jamaica Project Coordinator. Please look for our final report in next month’s Newsletter, as the mission should be completed by then.