Three Rotarians and one future Rotarian ventured to Belize to set up 13 Resource Centers in schools and also donated educational equipment and materials to set up a Preschool Learning Center in a building being constructed at the Corozal Junior College. The four Ohioans from District 6600 were joined by two Belizeans, almost 100 Belizean educators and the Rotary Club of Orange Walk.

The mission was only made possible through the generosity and dedication of hundreds of Rotarians and non-Rotarians who live and work in Rotary International District 6600. It was truly a global partnership to assist in sending basic education needs to the Pre and Primary schools of Belize. 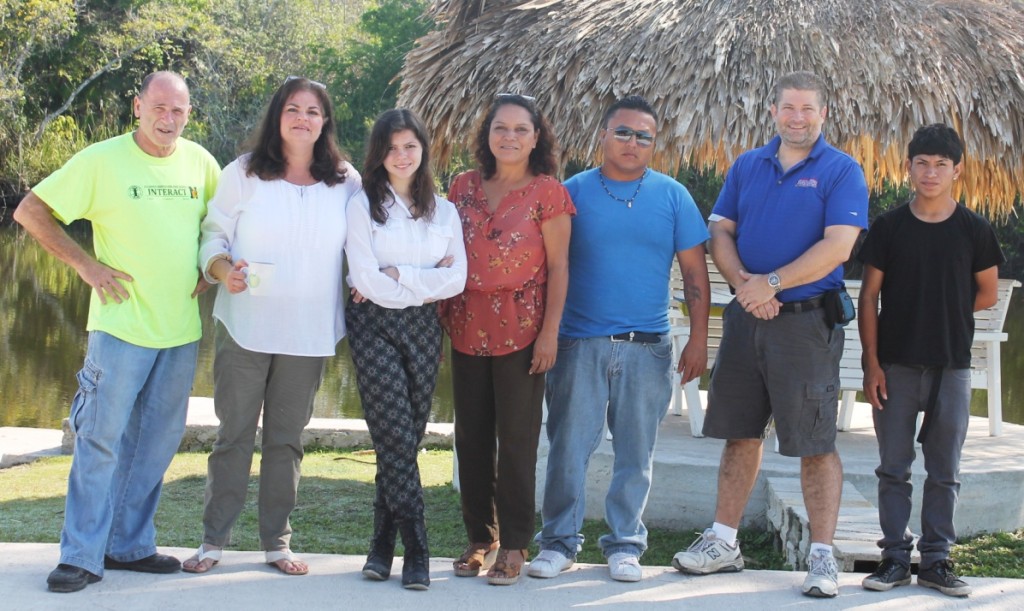 The container was released from customs on Friday, but we could not get a truck, so it came early Monday evening. Our customs broker not only donated his services but also got everything out in 4 days. The Rotary Club of Orange Walk made all the arrangements and kept in country port and transportation charges under $1000.00 U.S.D. 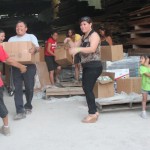 The container came late so we asked two schools to pick up that night and the remainder the following afternoon. I think they were happy to receive the educational equipment and materials as there were smiles all around. 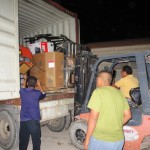 Orange Walk Rotarian Landy Burns once again had his people unload the container and stored the educational equipment and materials at his place of business. 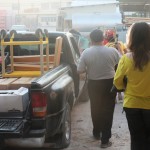 Everything was loaded into vehicles from small pickups to large cargo trucks. The following afternoon we worked into the night loading the remainder of the schools. The last school volunteered to help us clean up the area and to store the remainder of the product in the storage building pending final distribution to the Community College, Bullet Tree Falls RC School, and books that needed further assorting before they were distributed. 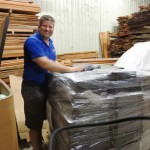 Kent is smiling because he has his towers… now we can go to work.

The Memorial Service, held in a nearby church, was attended by the entire school. When I asked who knew Father Bob almost all the students held up their hands. 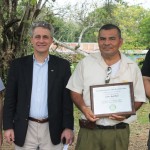 From left: Mel Honig, Rotary Club of Sylvania wearing the tee shirt Father Bob gave him when he went on one of Father Bob’s missions; Dr Steve Novack Galion Rotarian who made a special trip to Belize for Father Bob’s commemoration ceremony; Principal Victor Pott and Kent Iler, Elyria Rotarian. Not pictured are Galion Rotarian Mohsen Ressallat and Araceli Garcia. Araceli was instrumental in bringing the Resource Center to the school. Araceli met Father Bob when she was teaching in Santa Elena RC School and Father Bob was doing a mission there. 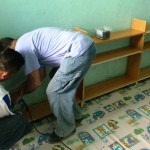 Byron and Mel building shelves… we all pitched in to complete the job. 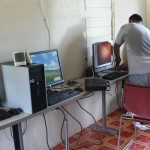 Byron and Kent setting up computers. 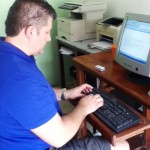 Kent checking out a computer: Music and educational games were downloaded into every one.

The teachers always helped in unloading the books and other educational equipment. At many schools everything was set up by the time we got there. Our Belize Project Coordinator, Carmen Carillo, was with us every minute making sure that everything went without a hitch. 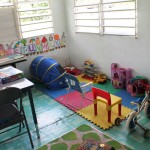 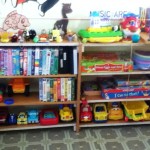 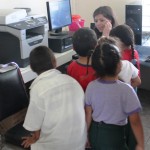 After setting up the computers, Tori would conduct a learning session for the younger children on how to use a ‘mouse’. 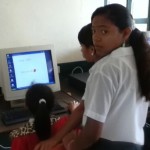 The older children did not need any help.

Wherever you placed the donated exercise mats children were sitting on them. 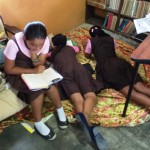 Within an hour of giving a book of readers to Araceli Garcia’s classroom five students found the books and became lost in thought.

The younger children always found the toys, puzzles and games more fascinating than books, although once the TVs and VCRs were set up the movies were also very popular. 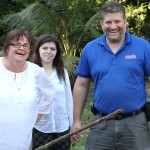 That’s a healthy scorpion on the end of the stick. Tori made sure she was standing behind someone as we all got the chance to inspect before returning the scorpion to its home unharmed. 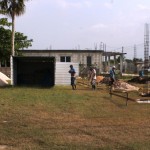 The construction site above will be the new Preschool teaching building for the Corozal Junior College. All the funds necessary for constructing the building will be provided by the college. During this mission we provided the college with much of the materials necessary to run the school as well as the electrical wiring and outlets.

The schools were very generous and provided us with food and liquids whenever appropriate. 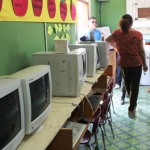 We had very little time to visit school sites we set up last year but the two we did had all their computers working and educational materials available to the students on a daily basis. The above site is at the school in Trinidad. 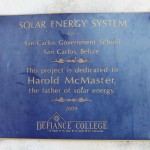 The San Carlos school is one of two schools we placed centers in where the community did not have electricity.

Kent and Mel climbed onto the roof to inspect the system. The school principal said the batteries needed replacing… but we had no problem using the electricity to build the bookshelves. We did not give computers to these two schools. 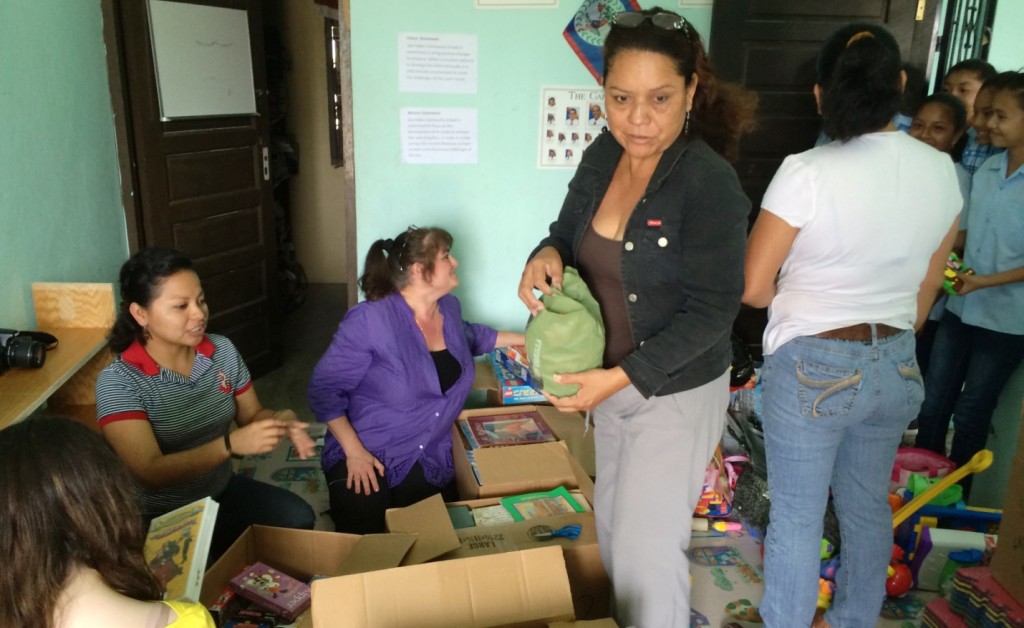 Amber (seated in blue blouse) working with students and teachers to help get books organized for children’s and resource library.

Having returned 10 days ago from the seventh mission of Resource Centers International (RCI) to provide much needed educational materials for primary school students in Belize, I have had time to reflect upon the enormity of the selfless sharing of talent and resources that underpinned the success of the project, and the potential of what was done to pay big ‘quality of life’ dividends well into the future.

During a one week period, a core team consisting of three District 6600 Rotarians (Team Leader and RCI founder Mel Honig of the Sylvania Club, IT Specialist Kent Iler of the Elyria Club, and me – also of the Elyria Club), my fourteen year-old daughter, an IT Specialist and former school teacher from Belize, and the former Early Childhood Development Education District Coordinator of Belize’s Ministry of Education worked to disseminate and set up educational materials within Northern Belize. On a personal note, I have never done so much physical work and gotten so ‘dusty’ in my professional career as I did on mission week, nor have I felt so good in decades. But ‘mission week’ was really the middle of the story…

Each mission begins with the collection of items to be disseminated by RCI: the much-coveted computers, projectors, televisions, VCRs, children’s VHS tapes, carts, cabinets, tables, shelving, toys, games, puzzles, colorful floor matting (the reaction of the children to this matting is priceless!), and – perhaps most importantly – books, books, books. On RCI Mission 7 to Belize, we were able to provide these materials to thirteen primary schools (two rural schools did not receive computers because they rely strictly on solar energy insufficient to support the computers), and one adult education center. Hats off to Mel Honig (who is too modest to relay the huge time and effort required to collect needed items) for working tirelessly for many months prior to each mission to solicit donations/subsidization of and organize materials to be disseminated by RCI. Kudos to the many vendors (e.g., Sam’s Club, which provides the floor matting at an enormously discounted price), libraries, organizations and individuals that supply these goods. And many thanks to MESA (a gem of Rotary District 6600) for storing and shipping the resources to their destination country, and for supporting the mission financially.

Space does not permit a just recounting of the roles of the many host country partners that contribute to the successful distribution and use of the RCI donations, but I would be remiss not to remark upon the impressive dynamic that I witnessed. Consider that the president of the (very small) Rotary Club of Orange Walk (Belize) owns a hardware business, and was able to provide a huge warehouse and lot for storage and dissemination of the large MESA shipment. Consider that our key contact in Belize, a wonderfully tenacious woman and former Ministry of Education employee named Carmen Carillo, was personally familiar with primary schools throughout the region and able to direct RCI resources to where they were most needed; additionally, she was clearly known and admired by school teachers and administrators alike, enabling her to effectively coordinate and give direction about the placement and use of items. (Carmen’s motivation and ability to check on the use and maintenance of donated items is invaluable, and guarantees the effectiveness of RCI missions long after international teams depart.) Consider that Byron, a former teacher and IT expert who witnessed the magic of a prior RCI mission to Belize, volunteered his time to work alongside Rotarian Kent to set up computers and troubleshoot technology issues. Consider, finally, that our RCI mission was featured on the nightly news (in what was the equivalent of a Channel 5 news story, but longer) not once, but on two separate occasions, based on different interviews, schools and footage. The positive media was just one indication of the significance of the RCI mission.

This brings me to the end of the story, well almost… I found the most compelling evidence of the importance of the RCI mission not in the nightly news, not in the effusive and sincere expressions of gratitude from school principals, not in the prepared student presentations for the RCI team (although these were unbelievably cute and moving), not in the plaques and awards prepared by some of the PTAs (as impressed as I was with the parents who came to help set up the resources and with whom I found – to my delight – I was able to converse a little using my college Spanish), and not even in my personal observations that the schools served had very few classroom resources, and that RCI was providing high quality and appropriate educational items (particularly children’s books!); rather, I found the strongest evidence of the importance of the mission in the eyes and actions of teachers who were clearly strategizing about the use of donated materials in everyday instruction, and in the reactions of students who were not only delighted by but also very much interested in using what they had received.

The true beauty of the RCI story is that it doesn’t really have an ending. Although there is every indication that the items donated through RCI will be highly valued and well maintained, most tangible items will eventually wear out or become obsolete. The impact of the learning and enhanced awareness that results directly from the use of these items, however, has no limits. RCI, particularly with its current emphasis on preschool and early childhood programs, provides critical resources and assistance for learning at the most critical stages of students’ development. More than once, I heard Mel say “who knows, maybe one of these children will become the next prime minister because he (or she) had the opportunity for a quality education.” There is no question in my mind that students in Belize will be capable of greater levels of achievement, greater capacity for critical thinking, and greater ability to effect positive change because of their enhanced learning environments. Important also is the potential impact of the demonstration of concern and “service above self” through RCI. I am quite proud to have been a part of, and to have involved my daughter in something that supports the World Community Services goal of fostering international understanding, goodwill and peace, and that will surely provide lasting benefits for the wonderful children of Belize who will, no doubt, be eager to ‘pay it forward.’

We have a continual need for computer systems and children’s books. The only thing that is keeping us from doing more is obtaining enough of these two items.