Mission 5 was the most comprehensive one to date due to many different objectives (five in all) that were incorporated into it.

In the past month monetary donations were received from the Rotary Club of Milan and the Northwest Ohio Nurses Association. Donation of tables was received from the University of Toledo. We still need computers, at least 50 as a minimum by the end of August 2012 for our next mission to Belize.

Mission 6 will be in the Orange Walk District with estimated dates of December 14th to the 21st when we will open six (6) new Resource Centers.

Support the mesa bike ride. It is not too late to make your pledge. Go to the following link:Http://www.rotarymesa.org/bicycletour.html. Click on the view and download for the informational brochure to make your pledge.Please remember to write in RCI or Mel Honig for the line “rider/team sponsored. I will be bicycling the Van Wert to Lima run on June 12, 2012.

With the efforts of Rodell (Board Chairman) his wife Gladys and the Resource Center Board the Resource Center at Alta Vista got off to an excellent start. Many individuals put a lot of effort into getting the computers up and running, building shelves, cleaning and washing everything, and being available for training. A small community that does not even have their own primary school (the children are bused to Pomona) they were more than enthusiastic to have their own center of learning. 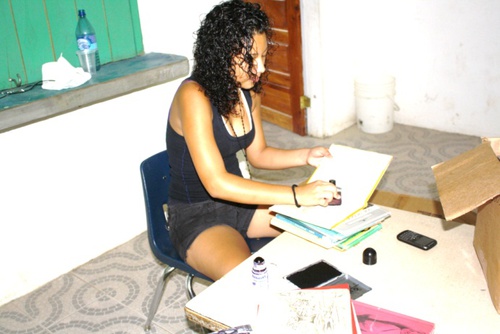 Each book was stamped with Alta Vista’s logo 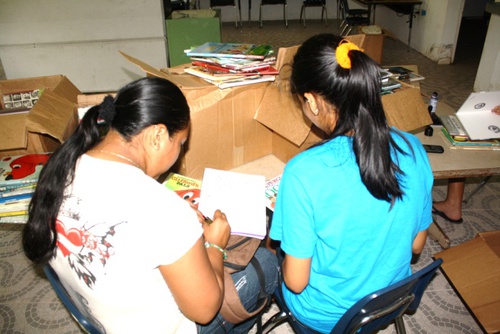 After stamping each book was catalogued 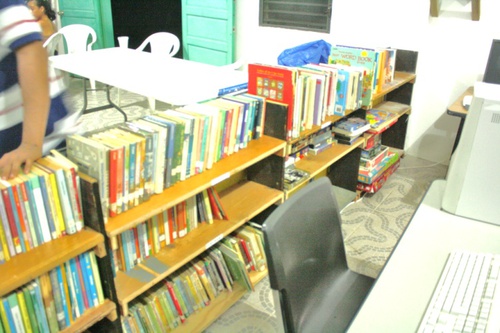 Books placed on the shelves in the Resource Center 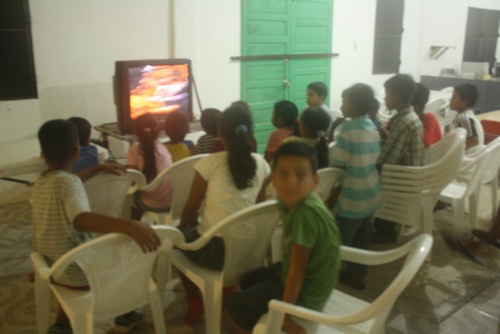 The children of Alta Vista enjoying a Disney movie 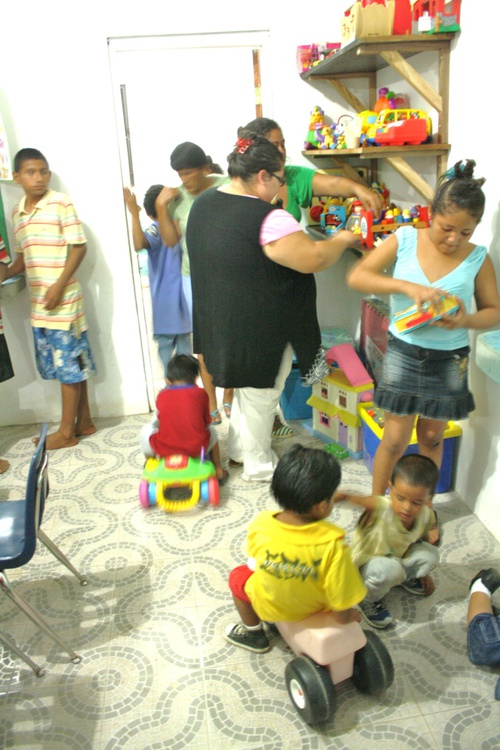 Putting toys away as quickly as they get used!

Valley Community is in the process of building a wall around the resource center to isolate it from the rest of the community center. This is an expensive process and fundraising was still going on as we finished our week in Valley Community. Board Chairperson Blanca Chan got the blocks donated for the wall but there is still a lot to do. 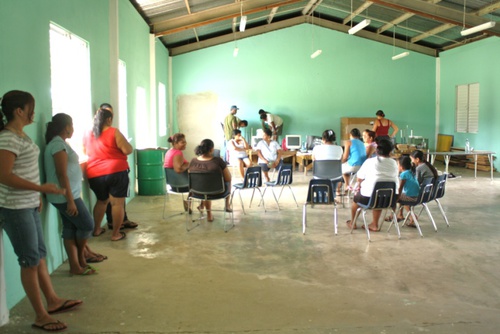 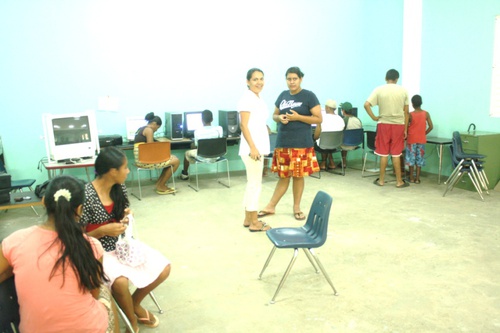 Training with the high school students

Pomona was a last minute replacement for Duck Run 2 and Hope Creek, so they had little time to update, repair and get the Resource Center room ready. Everything was not in place in time to do training, but our Belize team will be conducting training under the direction of Loyden Bejerano, Belize Project Manager and AnnaMae Ferguson, primary school teacher and resident of Pomona. Brenton Gongora, a teacher at the St Mathews School in Pomona will do the computer training. 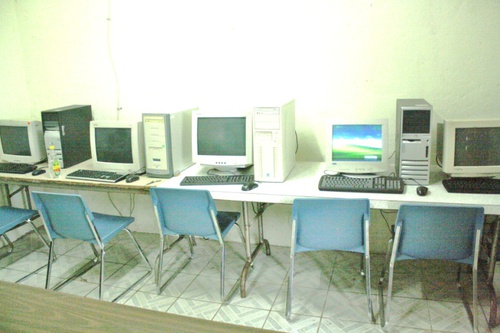 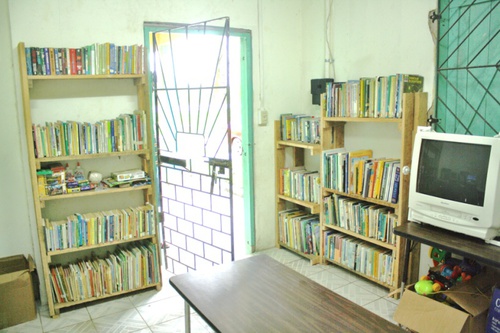 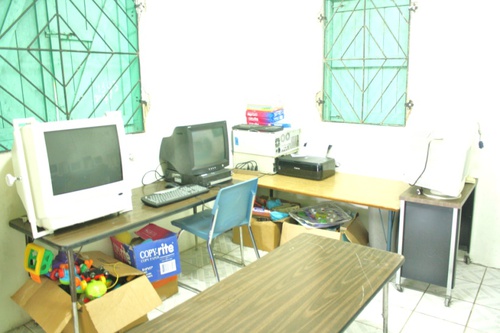 Evaluating All the Sites That Are One Year or Older

Loyden Bejerano, our Belize Project Manager, and I visited the sites established more than a year ago. Of the 11 sites opened 8 are still operational. Of the three sites closed one remained opened for 18 months before the school reclaimed the space. The other two closed sites were set up during Mission 3 and never truly became operational. This was a great disappointment because the equipment and supplies placed in these communities could have gone to another community. In these last two communities we spoke with the Village Chairman and requested that the equipment and supplies (everything was still there gathering dust) be donated to their local primary schools, schools that are desperate for books and computers. The chairmen agreed but had to discuss these moves with their communities before a final decision is made.

Concerning the other two villages that we opened centers in during Mission 3, one is only partially operational, while the other (Silver Creek) is taking full advantage of what we gave them. As we visited site after site we found that the successful communities had their computers functional and were using what was given them. The less successful ones had problems with their computers and had less consistent hours of operation.

Loyden and I discussed how we can improve the sustainability record of our centers and also get maximum usage of the equipment and supplies we donate to the community, and yet still meet one of the important objectives of our mission…’Community Empowerment’. We are putting these ideas into action in the next objective of the mission…Finding 6 Resource Center sites for the next mission in Orange Walk District this coming December. Loyden and I decided that we have to be more flexible; understand community dynamics; and evaluate and use community resources to best advantage both from a personnel and buildings/rooms availability standpoint in the future. One thing we still will not do is place centers in buildings owned by individuals.

Eleanor Carillo, Preschool Education Officer for Orange Walk District, set up appointments in communities identified as prospective sites for Resource Centers. Communities were selected based on need and leadership within the community. The communities we visited varied in population size from as few as 200 to over 5000 members. They represented a large economic cross-section from mainly subsistence farmers to a relatively affluent community that was once a former District capitol.

A large community just located on the Northern Highway the community center is ideally located, has several rooms suitable for use, and Village Chairman Randy Jones fully supports the concept. Two small rooms off the large central room will make excellent space for the Resource Center. 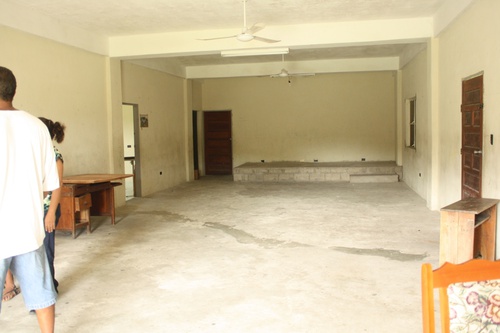 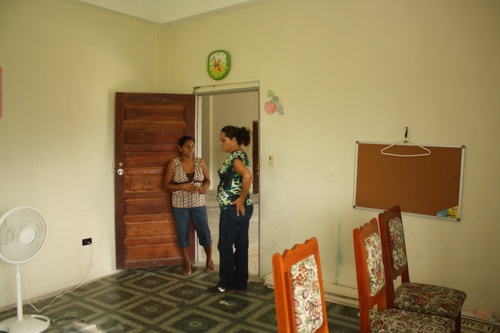 A small community of subsistence farmers and cane field workers this community has a small center that is ideally suitable as Resource Center. Many community members including Isaias Blanco, Village Board Chairman voiced their strong support. 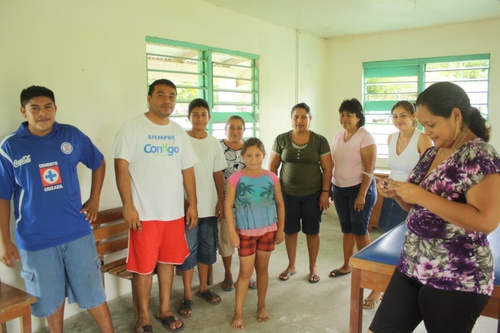 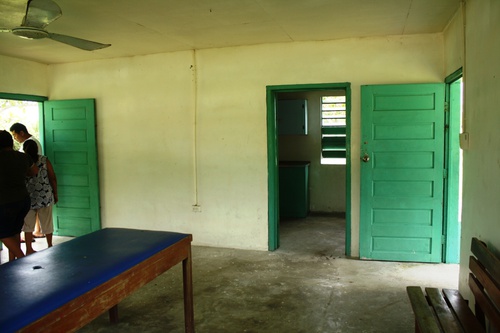 An isolated but large community, the school is currently expanding their size with the addition of a new building. A team from Cleveland State University was helping the school set up their computer center. What is still needed are equipment and supplies to outfit a preschool center that is planned for the addition. Principal Blanca Torres and Board Chairman Javier Soleis are very supportive of the initiative to help finish their project. 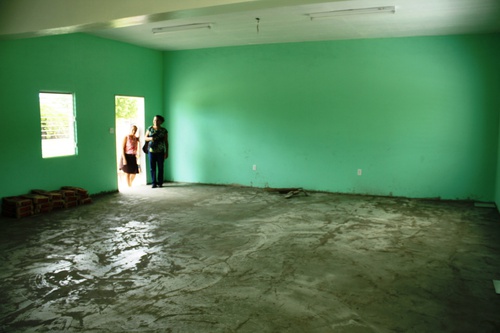 All the rooms are being tiled. The computer center below is in its finishing stage. Cleveland State University has outfitted the center. 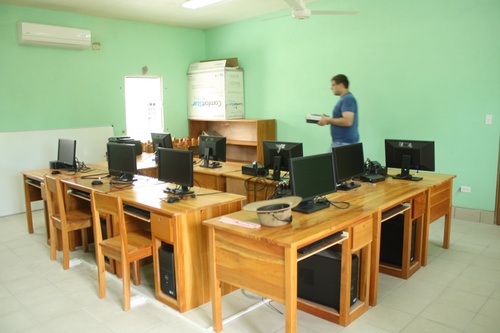 The largest of the communities visited, San Estevan has an outdated recently closed library and no computer center. Board Chairman Fidelmar Hernandez would like to update and reopen the library as a resource center with computers. 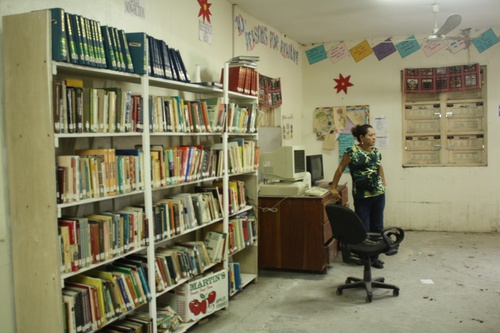 The smallest of the communities visited; the only available space for a Resource Center was a small long room adjacent to one of the classrooms in the school. With a few modifications they will turn this room into a complete Resource Center for the community. Both the Principal Sergio Chi and Teacher Felipe Marin live in the community and will be responsible for its operation and availability to the community. 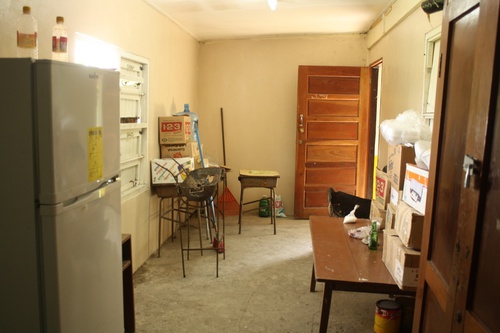 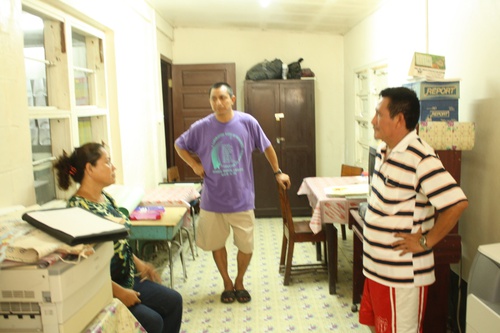 Roberto Bobadilla, Board Chairmen fully supports placing a Resource Center in his seldom used community center. This moderate sized town has few resources and is well off the main road. 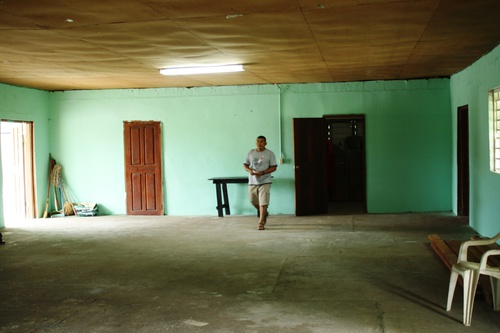 Did Not Have Electricity

Two communities did not have electricity to the buildings we placed Resource Center in during our December, 2011 mission. We did training at each of the sites, but did not have the computers up and running. Computer training was planned after the sites were electrified.

Last December, at a meeting with the Copper Bank high school students, we challenged them to come up with the money to install electricity at their new library building. Through several fundraising efforts they accomplished the mission and the building is now electrified. They will have their grand opening on July 4th as they are now working hard to put everything into place.

My apologies for not taking pictures of the interior of the Center. Felix Copo (computer center manager), Romeo Gorosica (Board Chairman) and Max Roisinger (Peace Corps Volunteer) are all working hard to make the center a success. The little red car is my rental, and did very well considering the hell I put it through for two weeks. 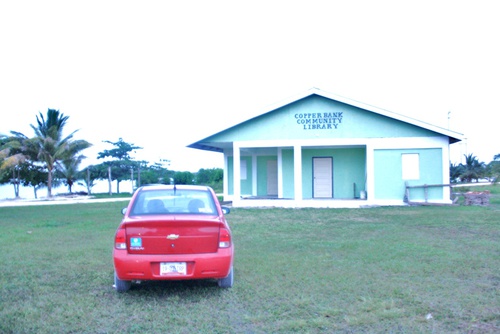 The other site without electricity is Yo Chen. Since our December mission they have installed all the necessary wiring to code. What they need is the money to pay for the final hookup. Yo Chen is a small community and the only way to raise money is through fundraisers. Communities get money from the government through taxes on establishments that sell alcoholic beverages. There is no such place in Yo Chen, as well as most of the small communities in Belize. 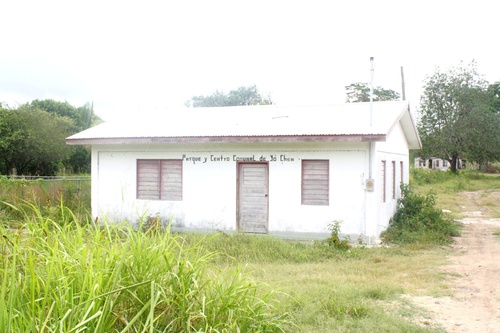 Hopefully by our next visit to Yo Chen in December, 2012 they will have their center fully operational.

Last December’s shipment to Belize was over budget. To cut down on the cost the following initiatives were taken.